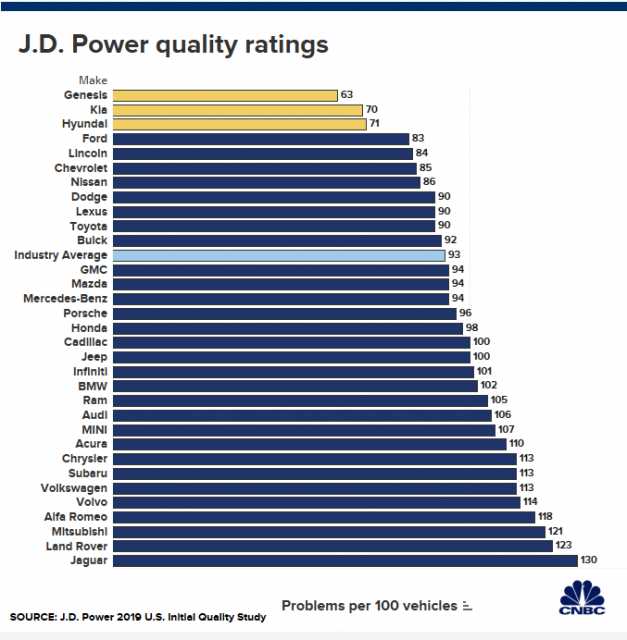 Once-dominant Japanese brands like Toyota, Nissan and Honda have taken a mighty fall on the quality charts, toppled on J.D. Power’s closely followed Initial Quality Study by two of the Big Three in Detroit as well as South Korea’s top carmarkers.

Korean automakers Genesis, Kia and Hyundai led the industry with the top three highest marks and widened their gap in the rankings with brands like Toyota and Lexus that had long held the lead in the annual study. Not a single European brand, including the vaunted Mercedes-Benz and BMW, earned marks above the industry average this year.

Ford, its Lincoln brand and General Motor’s Chevrolet ranked Nos. 4, 5 and 6, respectively, followed by Nissan and and Fiat Chrysler’s Dodge.

A decade of quality improvements came to a screeching halt last year, according to J.D. Power. While most manufacturers were able to solve nagging issues with the infotainment systems that had dragged down their results in recent years, there was an unexpected surge in classic, mechanical problems with engines, brakes, suspension and paint.

Long known as quality laggards, Korean carmakers have made major improvements over the past few years, according to Dave Sargent, J.D. Power’s head of automotive research. That was apparent not only in the overall scores for the three brands but the fact that the Hyundai Motor Group, which includes Genesis and Kia, as well as Hyundai, had six individual segment winners, more than any other manufacturer.

That has helped the Koreans improve their individual images, translating into rising sales for Hyundai and Kia, although the high-line Genesis, only recently spun off by Hyundai, has been struggling in the market largely due to its lack of SUVs.

The 2019 report should also help bolster Detroit’s long-tarnished reputation. Mainstream Ford and its high-line Lincoln division came in just behind the three Korean brands. That reflects a significant turnaround for Ford. Earlier in the decade, it had plunged in the survey due to transmission problems and issues with its high-tech Sync infotainment system.

Among the Japanese, only Nissan, Lexus and Toyota managed to crack the top 10, ranking seventh, ninth and 10th, respectively. Familiar brands like Mazda, Honda and Acura all ranked below industry average, with struggling Mitsubishi ranked third from the bottom among the 32 brands covered by the 2019 survey.

The study focuses on issues buyers experience during the first 90 days of ownership, reporting the results in terms of problems-per-100 vehicles. To put things into perspective, industry quality leader Genesis had a score of what J.D. Power calls 63 PP100 this year, compared with 83 for Detroit leader Lincoln, 86 for Japan’s highest-scorer, Nissan, and 90 for Toyota.

The industry average was 93 problems per 100 vehicles. Mercedes-Benz narrowly missed that with a score of 94, and Mitsubishi had 121. Jaguar, the worst of the 32 brands, had an average 130 problems.

That still works out to just over one complaint per vehicle, on average. And the best individual product in the study, the iconic Porsche 911, had just 58 problems per 100, meaning barely one issue for every other sports car.

But, Sargent noted that “some traditional problems crept up this year including paint imperfections, brake and suspension noises, engines not starting and the ‘check engine’ light coming on early in the ownership experience.”

One top of that, he added, “more people are having issues with their advanced driver assistance systems, which are critical for building consumer trust in future automated vehicles.”
C

There's an episode on DONUT about the history of J.D. Power. Not what you might think. (Spoiler Alert: Coarse Language)